The Alesis Picoverb is a budget multi-effects processor with 16 preset effects including halls, rooms, plates, chorus, flange, delay, and rotary speaker.  It is packaged in a 1/4 rack space box and is built on a single pcb so it looked like a nice candidate for a Eurorack conversion.  The effects are basic and lack tweakable parameters but the sounds are nice and reminiscent of what Alesis was doing in the 90’s.   A description of the individual effects can be found in the Picoverb manual.

The conversion to Eurorack is fairly straightforward and consists of three basic modifications.

I would rate the difficulty of this conversion as intermediate since it requires some rework of 0805 components on the Picoverb pcb.  In order to simplify the conversion I have made a small carrier pcb as part of a conversion kit. 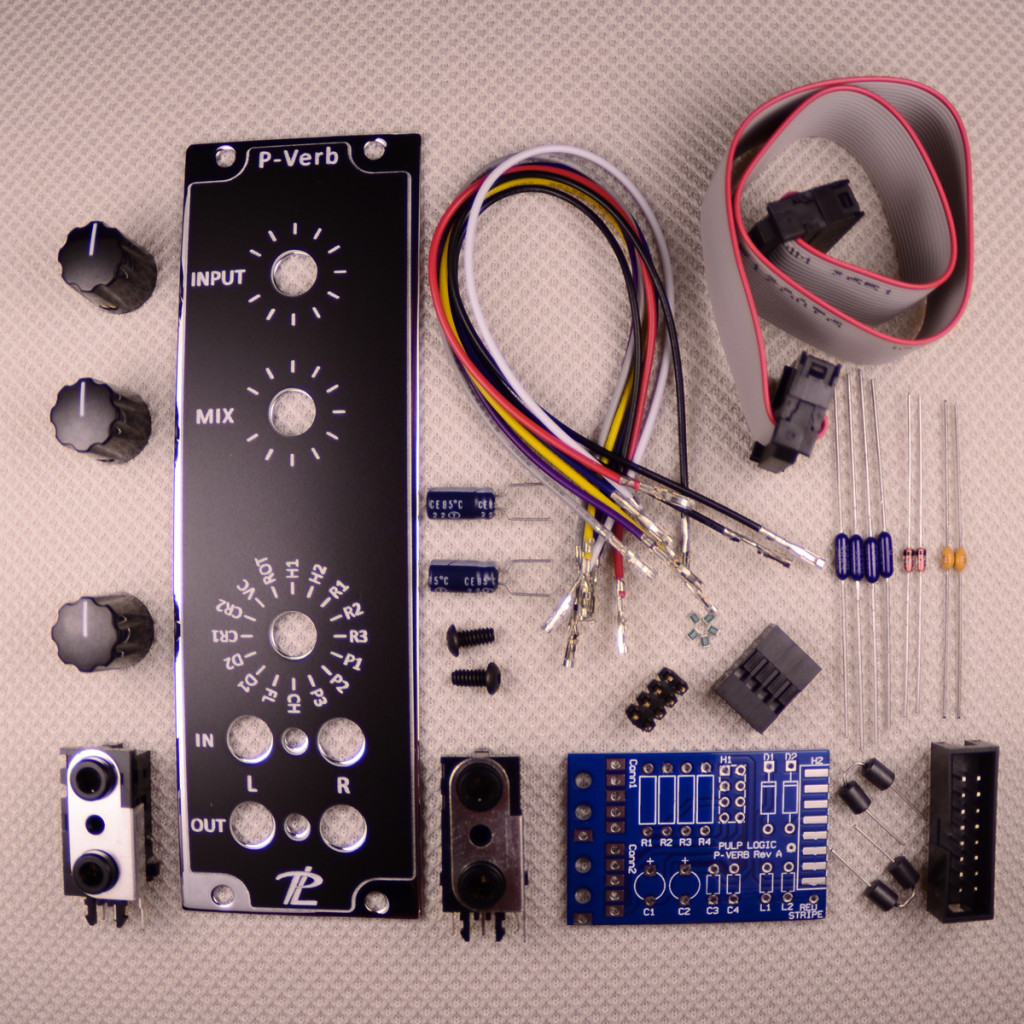 The first step in the conversion is to remove the Picoverb pcb from the chassis. 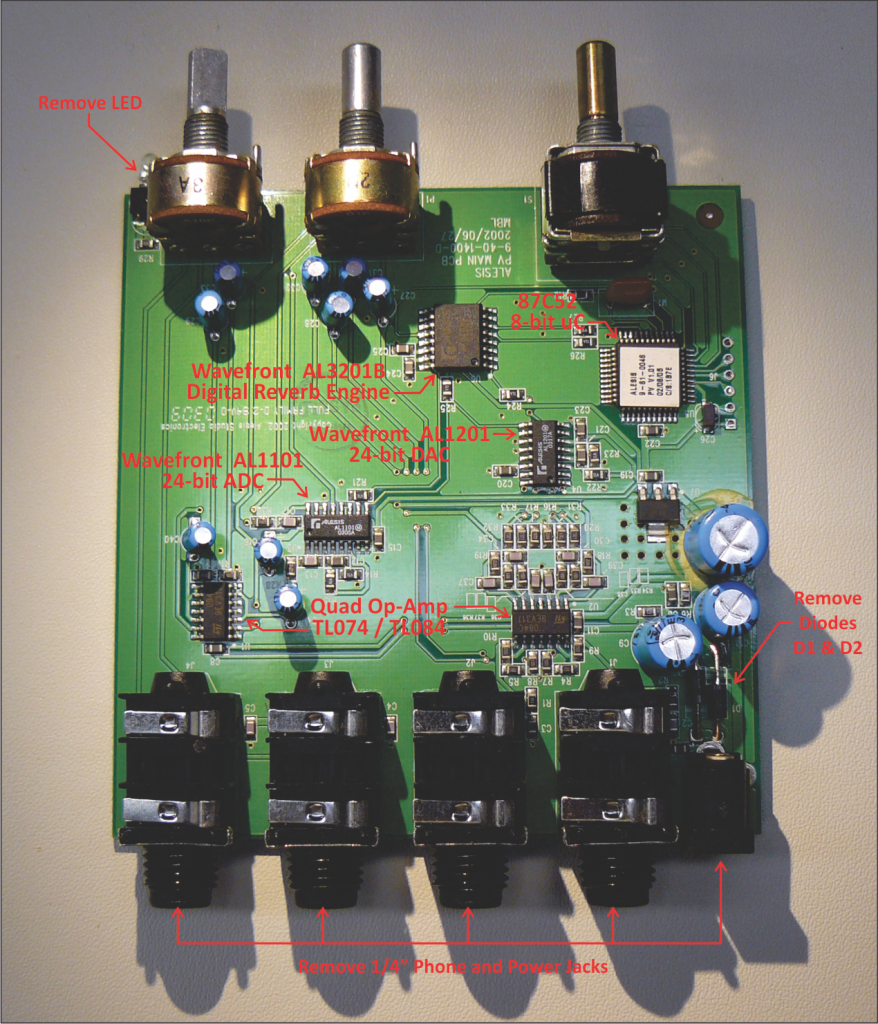 Remove the four 1/4” phone jacks (J1-J4) and power jack (J5) from the PicoVerb PCB.  The jacks can be a little stubborn because of the lead-free solder.  Sometimes it helps to add a little tin/lead solder to lower the melting point before desoldering.  Remove rectifier diodes D1 and D2 by cutting the leads then remove the clipped leads from the pads nearest to the filter capacitors.  Remove LED D3 by cutting the leads at the base of the LED.

Increase the output gain on the Picoverb by replacing the 10k resistors R4 and R5 with 2k.  This will increase the gain from 3x to 11x. 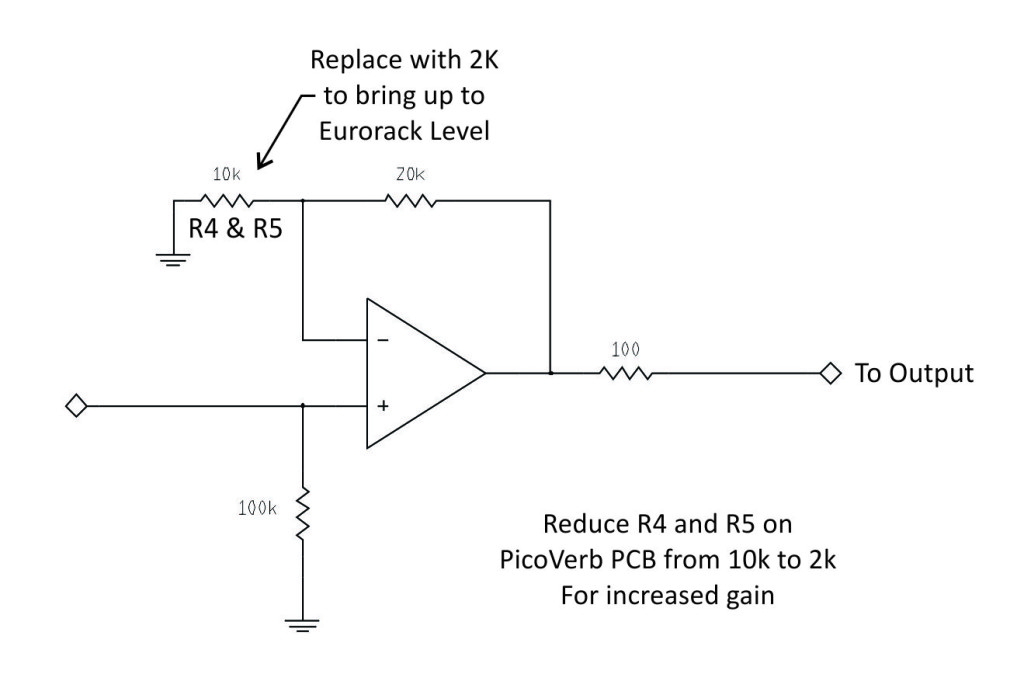 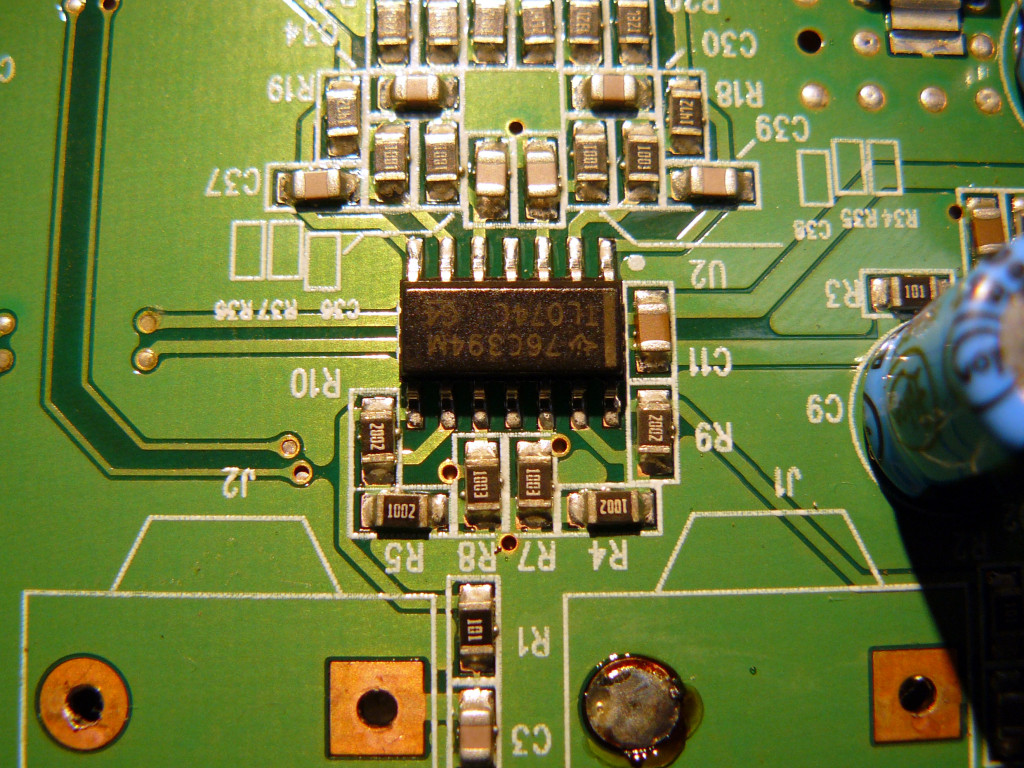 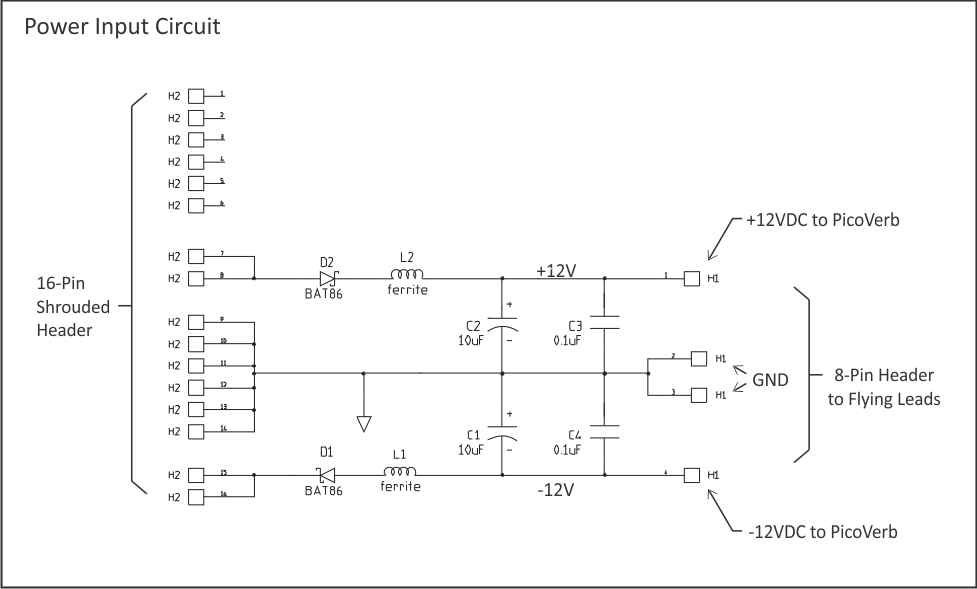 The power input circuit provides the means for connecting a standard 16-pin Eurorack ribbon cable to the P-Verb module.  Schottky diodes are used for  power polarity protection.  Ferrite beads and filter capacitors are used to provide stable power to the P-Verb and to minimize high frequency contamination from returning to the Eurorack bus.  Power connections to the PicoVerb are made at H1 through the flying leads.  When assembling the PCB care should be taken to ensure correct polarity for the diodes D1 and D2 and the Electrolytic capacitors C1 and C2. 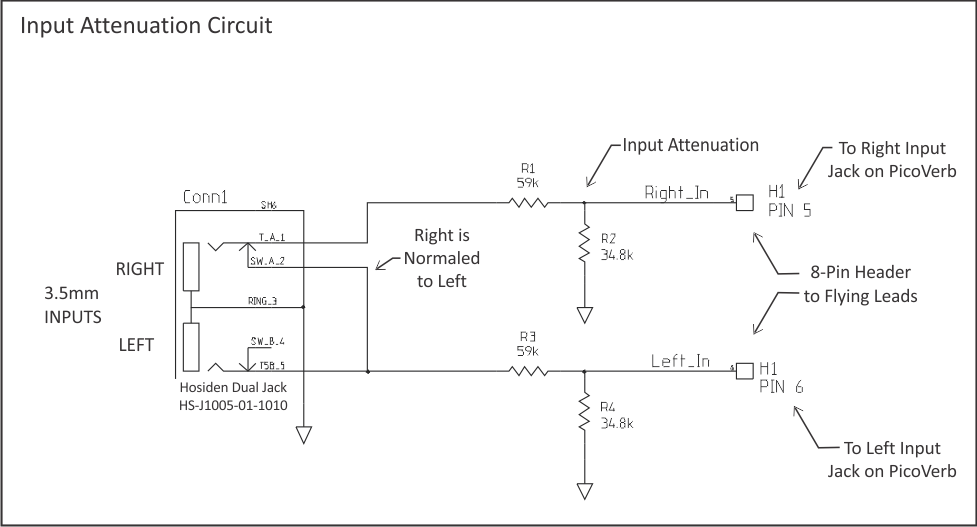 The input attenuator brings the a Eurorack signal down to an appropriate level for the PicoVerb.  It is comprised of a simple passive attenuator made from R1 and R2 on the right channel and R3 and R4 on the Left.  The right input is normalized to the left input so that when a no signal is inserted on the right side the left input will be processed for both inputs.  This is important for some of the effects that create a stereo separation on their output. 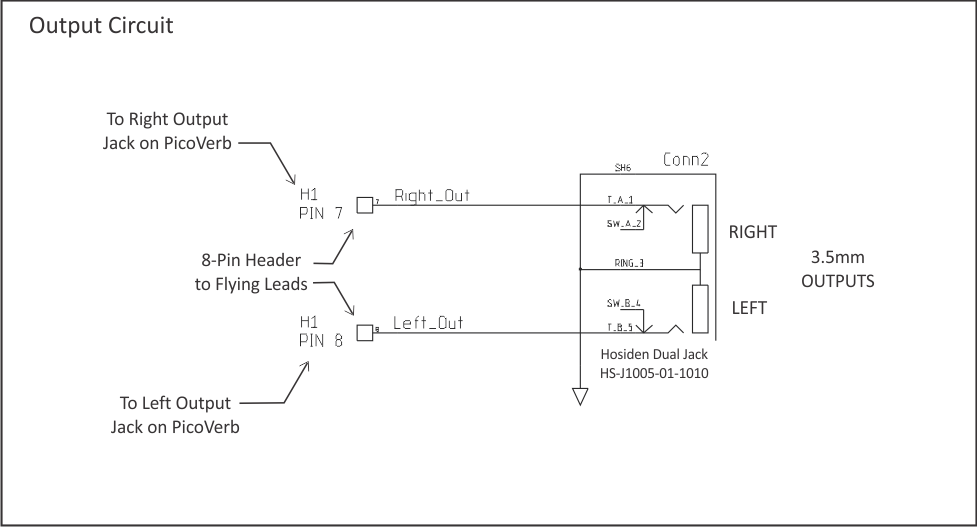 The output circuit simply connects the output of the Picoverb to the 3.5mm jacks on the P-Verb. 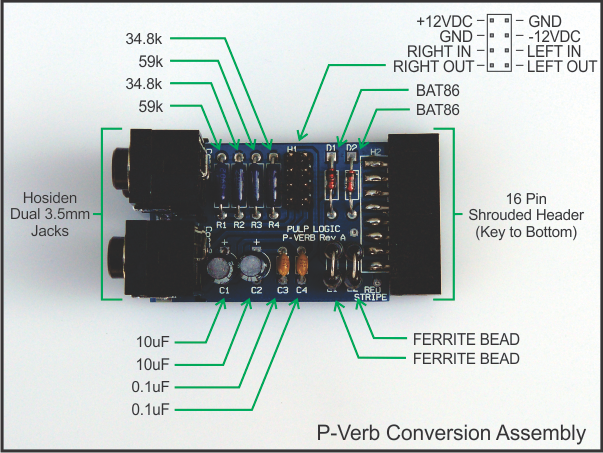 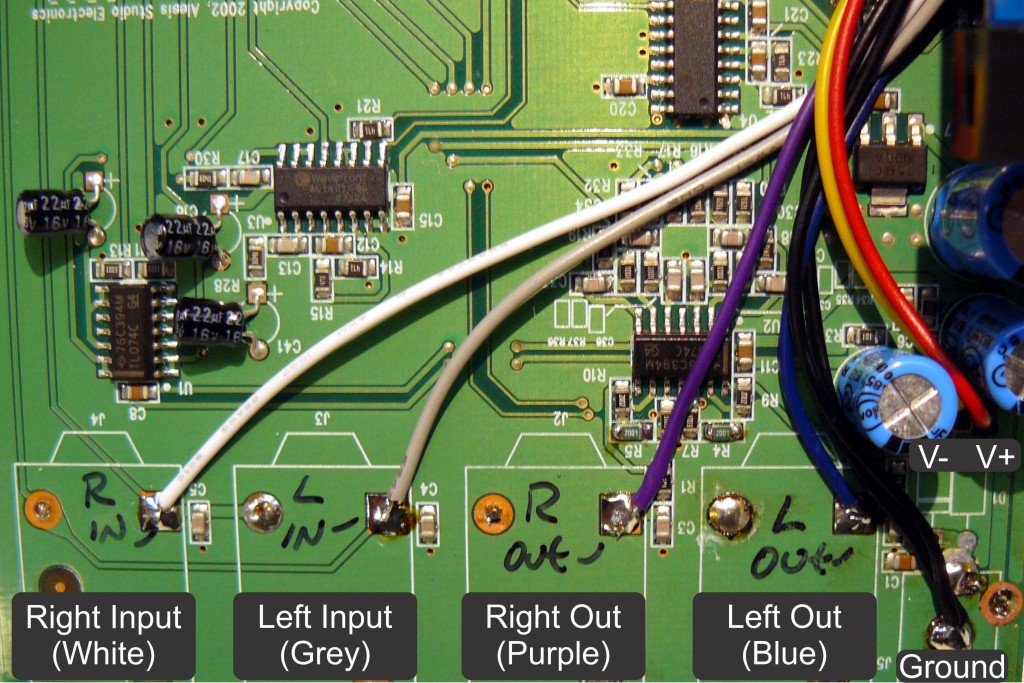 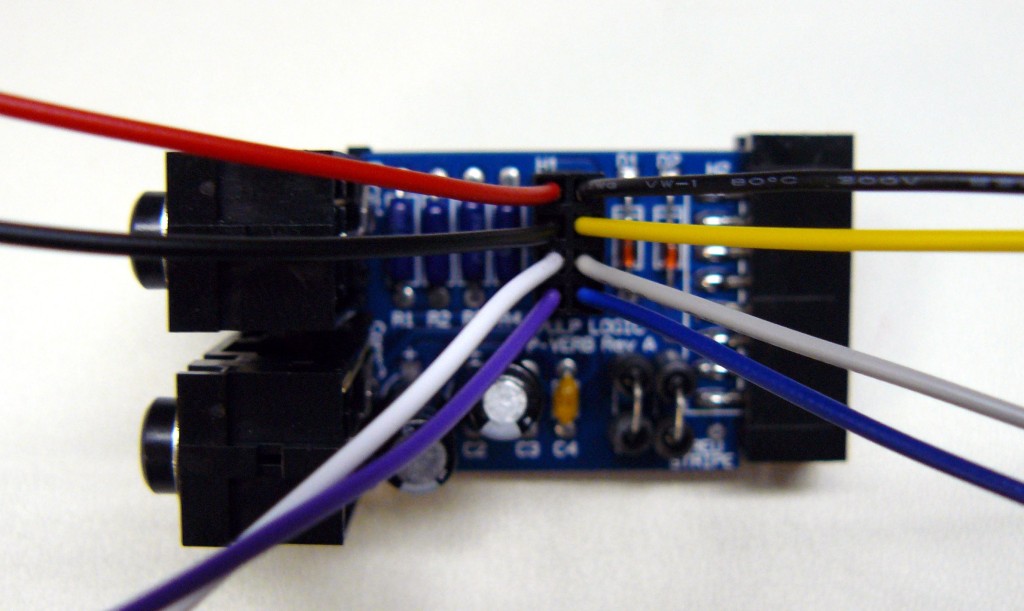 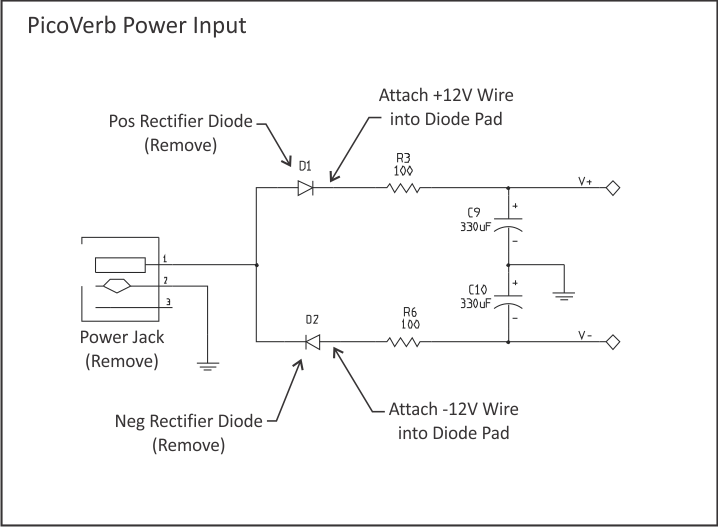 Glamour shot by my friend Trenton Blizzard.  Check out his blog – trentonblizzard.blogspot.com 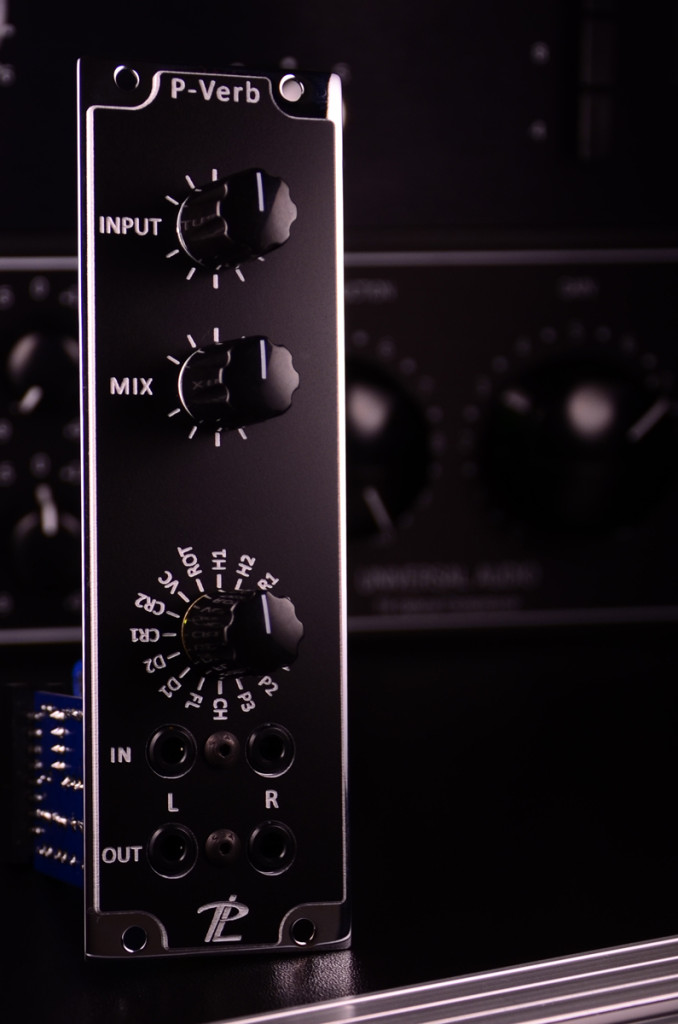